Product overview
Windows Server 2016 is the cloud-ready operating system that supports customer workloads while introducing new technologies that make it easy for customers to transition to cloud computing when they are ready. Windows Server 2016 delivers powerful new layers of security along with Azure-inspired innovation for the applications and infrastructure that power business.

Editions overview
Customers can choose from three primary editions of Windows Server, based on the size of the organization as well as virtualization and datacenter requirements:
• Datacenter Edition is ideal for highly virtualized and softwaredefined datacenter environments.
• Standard Edition is ideal for customers with low density or non-virtualized environments.
• Essentials Edition is a cloud-connected first server, ideal for small businesses with up to 25 users and 50 devices. Essentials is a good option for customers currently using the Foundation Edition, which is not available with Windows Server 2016. 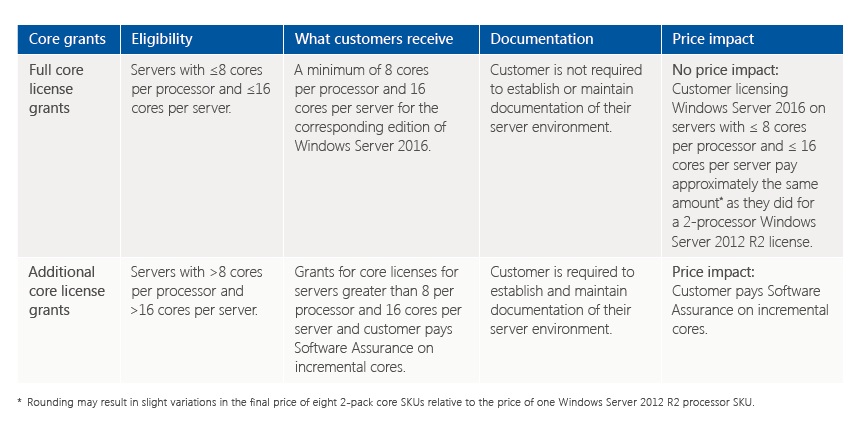 Announcing servicing guidelines for Windows Server 2016
With prior releases, Windows Server has been serviced and supported through a 5+5 model, with 5 years of mainstream support and 5 years of extended support. This model—renamed Long Term Servicing Branch (LTSB)—will continue with Windows Server 2016 for customers who choose to install full Windows Server 2016 with Desktop Experience or Server Core.
Customers choosing the Nano Server installation will opt into a more active servicing model—known as Current Branch for Business (CBB)—similar to the experience with Windows 10. This approach supports customers who are moving at a cloud cadence of rapid development lifecycles and wish to innovate more quickly. Since this servicing model continues to provide new features and functionality, Software Assurance is also required to install and use Nano Server.