PER CORE: Gives customers a more precise measure of computing power and a more consistent licensing metric, regardless of whether solutions are deployed on physical servers on-premises, or in virtual or cloud environments.
– Core based licensing is appropriate when customers are unable to count users/devices, have Internet/Extranet workloads or systems that integrate with external facing workloads.
– To license a physical server—when running SQL Server in a physical OSE—all physical cores on the server must be licensed.
– A minimum of four core licenses are required for each physical processor on the server. 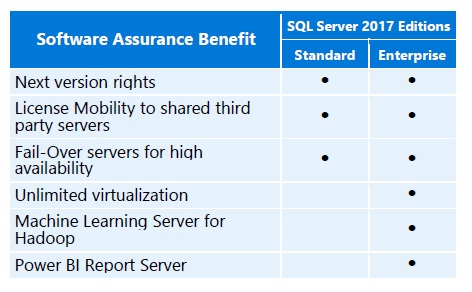 INDIVIDUAL VIRTUAL MACHINES OR CONTAINERS
As hardware capabilities grow, it continues to be more common for each database to use a fraction of its server’s computing power. When deploying databases on Virtual Machines (VMs) or containers that use just a fraction of a physical server, savings can be achieved by licensing individual VMs or containers. 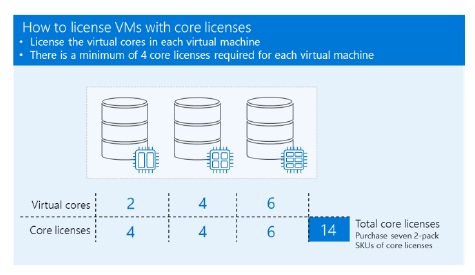 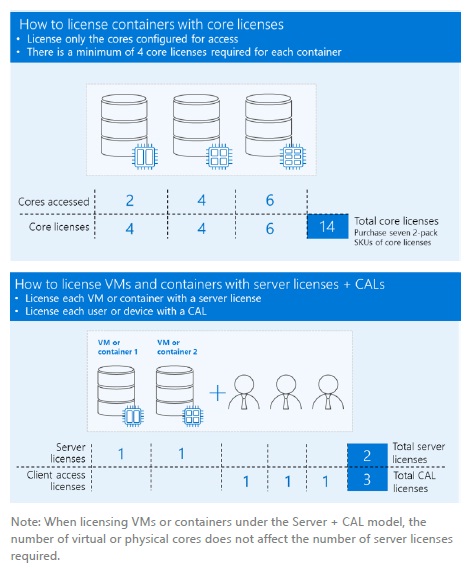 HIGH-DENSITY VIRTUALIZATION OR CONTAINER DEPLOYMENT
Further savings can be achieved by licensing SQL Server high density VM or container deployments. This is a great option for customers who want to take advantage of the full computing power of their physical servers and have very dynamic provisioning and de-provisioning of virtual resources or container images. 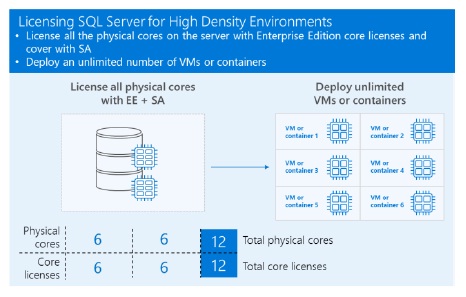 • Customers can deploy an unlimited number of VMs or containers on the server and utilize the full capacity of the licensed hardware, by fully licensing the server (or server farm) with Enterprise Edition core licenses and SA coverage based on the total number of physical cores on the servers.
• SA enables the ability to run an unlimited number of virtual machines or containers to handle dynamic workloads and fully utilize the hardware’s computing power.

Licensing for high availability
SQL Server software can be configured so that if one server fails, its processing will be picked up, recovered and continued by another server. Each active server licensed with SA coverage allows the installation of a single passive server used for fail-over support.

Licensing for non-production use
SQL Server 2017 Developer Edition provides a fully featured version of SQL Server software—including all the features
and capabilities of Enterprise Edition—licensed for development, test and demonstration purposes only.

Customers may install and run the SQL Server Developer Edition software on any number of devices. This is significant because it allows customers to run the software on multiple devices (for testing purposes, for example) without having to license each non-production server system for SQL Server.

A production environment is defined as an environment that is accessed by end-users of an application (such as an Internet website) and that is used for more than gathering feedback or acceptance testing of that application.